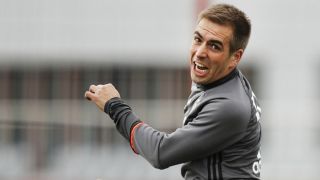 Bayern are 13 points clear of surprise packages RB Leipzig at the top of the table with only nine games to go, while third-placed Dortmund are a further two back.

The defending champions are therefore on the brink of sealing a fifth consecutive title, but Lahm, who is retiring at the end of the season, thinks criticism should be directed away from his side.

He told Stern: "Borussia Dortmund are an unbelievably talented team who could have made the Bundesliga title race a lot closer. Although you have to say the rest of the Bundesliga lacks quality.

"I don't think Bayern Munich alone is responsible for how good we are doing. If we are 13 points clear after 25 games, it means that other well-positioned clubs like Schalke or Wolfsburg have not been set up to win consistently.

"The financial situation in the league wasn't that different in the years we finished second and fourth."

Lahm also elaborated on why he opted not to take up the position of sporting director at Bayern after his retirement, pointing to president Uli Hoeness' huge continuing influence.

"Generally, you can only influence things in and around the team when you hold that responsibility," he said.

"I think [Bayern president] Uli Hoeness is too energetic – too young – to let go. He still wants to influence things himself. And he has every right to do that, he is chairman of Bayern's supervisory board and has achieved incredible things for the club."

Bayern need five more wins to be certain of the title and are at home to Augsburg on Saturday.