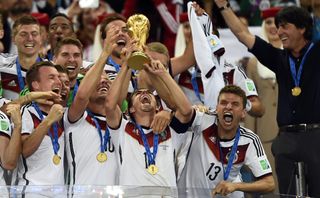 Former captain Philipp Lahm is confident Germany can bounce back from their early World Cup elimination in Russia.

The 2014 winners lost group matches to Mexico and South Korea as they failed to get past the group stage for the first time in their history.

Lahm, who lifted the trophy four years ago, said it would be a bittersweet moment when he brings the trophy to Moscow’s Luzhniki Stadium Sunday, but backs Joachim Low’s team to redevelop themselves as future winners.

"I’ll be passing on the pride that German football has felt for the past four years. This pride will be handed over to the winners, and there’s no doubt that it will be a powerful image for the beautiful game," he said.

"It will be a wistful moment for both us and Germany and an incentive to win the Trophy back.

"Bringing together and building a team that can become European and world champions is an ongoing process and a minor miracle.

"While what we saw from Germany was by no means a work of art, I’m sure that they have the power to come back stronger and develop a new generation who can live up to Gary Lineker’s famous assertion that 'Football is a simple game. Twenty-two men chase a ball for 90 minutes and at the end the Germans win.'"

France, winners of the 1998 World Cup, will play Croatia in the decider after wins over Belgium and England respectively.