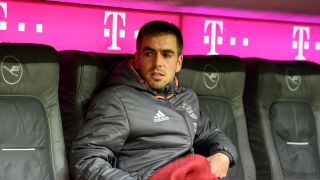 Philipp Lahm says he would "definitely change something" on the Bayern Munich board, despite previously rejecting the opportunity to become their sporting director.

Uli Hoeness is Bayern's current president, with Lahm crediting the three-time European Cup winner with their development as a footballing superpower.

However, all is not well at the Allianz Arena with head coach Carlo Ancelotti reportedly set to lose his job after a poor recent run.

It is not just Ancelotti's future that should be uncertain, according to Lahm, with the club's former captain open to changes at board level.

"I would definitely change something," he said, when asked by Business Insider. "But that isn't necessarily something to talk about now."

On the possibility of returning to Bayern at board level, he added: "I've always said that there will never be an area that I know better than football.

"I have played football since I was five years old. This is my core skill and it will always remain so. In this respect, there is no reason not to return to football.

"The most important thing for Bayern has always been that, with Karl-Heinz Rummenigge and Uli Hoeness, the two leaders at the top have themselves played football at the very highest level. They know 100 per cent about their profession. That was the biggest thing they could put into the club.

"And I would say I have the football knowledge, too. As for everything else, let's see what happens."

Lahm reserved praise for Hoeness' impact at Bayern, but added that he is not the type of president he would lean on for advice.

"Uli Hoeness has developed Bayern from a small Bundesliga club to a club that is one of the top five in Europe," he said. "That was a great achievement.

"I have seen how he conducts business and negotiations and I have certainly taken something from him. But, as a mentor, I definitely would not call him."