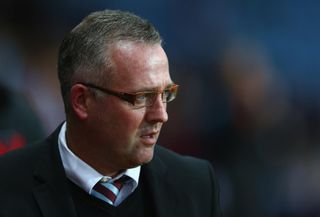 The 27-year-old produced a smart turn and finish to get the hosts up and running at Villa Park before Andreas Weimann doubled the advantage prior to the break.

Nikica Jelavic's header found its way in via an Aly Cissokho deflection 16 minutes from time, but Villa held on to continue their unbeaten run in the top flight this term.

Lambert highlighted Agbonlahor as a standout performer on Sunday and insisted his side's overall showing warranted the three points.

"I thought in the first half we were outstanding, the game plan and the tactical aspect of the game was outstanding and against a good side - the three at the back system is a hard one to play against," he explained.

"I don't think if we'd scored another couple of goals, anyone could have begrudged us that. That would have made the second half a little bit more at ease.

"Gabby today was, especially in the first half, unplayable. His running power and his speed were excellent but the movement in the midfield was terrific.

"It's been a terrific start for us and hopefully we can keep it going."

On El Ahmadi, the Scot explained: "It looks like he's going to sign at Feyenoord. He's been great for me but it's a chance for him to go back, he's in his last year.

"We'd obviously lose him in the Africa Cup of Nations so it made sense he went back home.

"There's no update on [Cleverley] at the minute to be honest, he's still Manchester United's player. Nothing went forward on that.