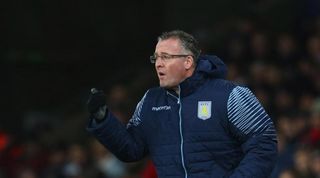 Delph became the third Villa player to be sent off in their last four Premier League games when he was shown a straight red card for a late tackle on Jordi Gomez early in the second half at Villa Park on Sunday.

Sunderland were unable to make the most of their numerical advantage, although Gomez almost won it late on when his strike came back off the post.

Villa also came close to a late winner, but Lambert was content with a point in the circumstances.

"It's hard enough playing with 10 men at any time - when you go Saturday to Saturday," the Scot said.

"But when you're playing two games in three days - the lads are running on empty.

"To get the result after going down to 10 men for that length of time was excellent.

"It wasn't a performance where we had backs to the wall either. We had chances to win it.

"Getting Fabian sent off was a big blow but all credit to the lads, we kept knocking on the door and we could have won it. We had chances to do it at the end. But it is a big point."

The Villa boss defended Delph for his challenge on Gomez which resulted in referee Martin Atkinson given the midfielder his marching orders.

He added: "I never really saw it the first time in normal time. I have seen it once on the replay. It's a hard one.

"I don't think there was any malice in it, like the Kieran Richardson one at West Brom.

"In the modern day game, you probably don't need much contact with people now and it can happen. I think there's one in the middle of the pitch in the first half on Andi Weimann which is just the same.

"I'd need to have a look at it. I have only really seen it once. I will look at it from different angles and see."