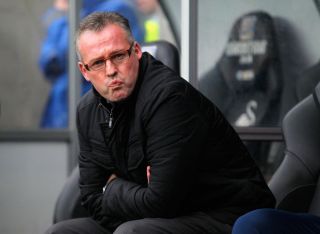 Supporters in the away end at the Liberty Stadium made their feelings known in the closing stages after goals Wilfried Bony (two), Jonjo Shelvey and Pablo Hernandez consigned Villa to a defeat that leaves them four points above the relegation zone with three games remaining.

Manager Lambert, who this week stated that he is relaxed over his future amid uncertainty over whether Randy Lerner is to sell the club, insisted he empathised with Villa fans, but would not take the criticism to heart.

"I totally understand supporters," he said. "This is a huge football club where the expectancy level is so high because of what it's done in the past.

"That's normal when things are not going well. You've got an expectancy level that you've got to live up to here. That's the bottom line.

"It's something you take on your shoulders."

Shelvey's stunning strike from the centre circle was a goal-of-the-season contender and Lambert described it the moment of magic as a "turning point".

The Scot called on Villa fans to get behind their team when they face Hull in their last home game next weekend and he is well aware of the importance of the match.

"You'd be more worried if it wasn't in your own hands," he added. "Next week's game is a cup final. That's it in a nutshell.

"If there's ever a game for the fans to get behind the players, it's next Saturday, and they will."