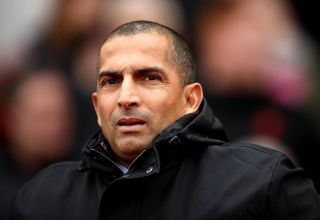 Sabri Lamouchi urged his Nottingham Forest players to improve their game management after enduring a nervous finish to their 3-2 win over Blackburn.

Forest twice held a two-goal lead but on both occasions allowed their opponents back into the contest.

Goals from Joe Lolley and Lewis Grabban with a penalty put the Reds 2-0 up before Stewart Downing pulled one back.

Grabban’s header then made it 3-1 just after the break, only for a Joe Worrall own goal to leave Forest to defend a slender advantage for the final 19 minutes.

Victory moved Forest level on points with third-placed Brentford in the Championship table.

“We head into the new year in the best way, with three victories in a row and nine points. I cannot ask any more,” said Forest head coach Lamouchi.

“We started the game in a good way, we played well and we created chances. We scored goals – our only mistake was that, at 2-0, we thought that the game would be easy and that we might be able to score three, four or five goals.

“We gave them the chance to come back into the game with a mistake and, after that, we started to panic a little. But the players fight until the end, they work hard and they have played three games in a week, at Christmas time.

“This league is so tough and mentally we need to be ready. My players, today, they won because they wanted the victory more than the opponent.

“I am so happy for that, because it is positive for the rest of the season. Now we must just keep going. When the players are all focused and we play as a team, as we know we can, everything is easier. But I am happy, because we have three wins in a row.”

Tony Mowbray felt defeat was harsh on his side but believes fatigue has started to catch up with his players.

“I think we did enough to take some positives from this. We should not go away really down. We came here, controlled much of the game and probably deserved more from it,” said Mowbray. “We did not get more and that is just football.

“We do have some key players missing at the minute, the balance of the team is not right and we have a few players who are under the weather. There are a lot of people coughing and spluttering with flu.

“It has been a tough schedule for us, but thankfully we get back to Saturday-Saturday games pretty quickly now.

“We only had a few days to prepare for the Wigan game recently and we lost a pretty key player (Bradley Dack) through injury in that game. Who knows if fatigue played a part in that?

“On the back of that, it feels as though the games have come really fast – five games in 13 days, it is tough. I felt we were a bit flat before the game.

“I am not moaning. This was a disappointing day results wise but, if you are going to look at the positives, we are still only four points outside of the play-off places, with plenty to look forward to.”