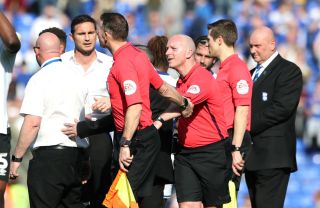 Derby manager Frank Lampard has been charged with misconduct by the Football Association as a result of his behaviour after Friday’s 2-2 draw with Birmingham.

Lampard confronted referee Simon Hooper on the pitch at full-time and said in his post-match press conference he felt the official had denied his side a clear penalty in the 74th minute which would have presented them with a chance of victory.

“It is alleged his language and/or behaviour on the field of play after the conclusion of the fixture amounts to improper conduct,” said a statement from the FA.

It is the second time this season the former Chelsea midfielder has been given a disciplinary charge, having been fined £2,000 after getting sent to the stands in September.

Lampard has until 6pm on Monday to respond.