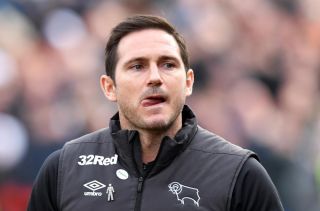 Lampard has guided the Rams to a top-six finish in his first season as manager and they take on Leeds in the first leg of their play-off semi-final at a sold-out Pride Park on Saturday evening.

“I love them, I watch them year in year out. I think they’re some of the most exciting games you’ll see in world football,” Lampard said.

“The play-offs do usually serve up some passion, some resilience, and some games that stay with you for years.

“That should be an excitement for the players, it certainly is for me.”

It is the fourth time in the last six seasons that Derby have contested the play-offs and this time they are the form team having lost only one of their last 12 matches.

“The fact that we’ve been on a good run has to be put to the side because the league is now done and we have to focus on these two games,” Lampard said.

“Very quickly in the week we turned our attentions to what’s coming and the huge games against Leeds.

“I respect them hugely, but we focus on ourselves and we’ll be ready.”

Leeds looked on course to end their 15-year Premier League exile via automatic promotion when they sat top of the table in March before losing five of their last nine games.

Marcelo Bielsa’s side took just one point from their last four, but Sweden defender Pontus Jansson said they have picked themselves up off the floor.

“Either you be sad that we lost automatic promotion or the other side is that you are looking forward and buzzing for the play-offs,” Jansson said.

“We decided at the beginning of this week, all the players and staff, to just look forward and accept it.

“Don’t feel sad. Use this as motivation. Some people say going up at Wembley is just amazing.

“It’s a harder way, but if you can go that way it’s just unbelievable, so we have to look at it that way.”

Jansson is nursing an ankle injury but said he would play in a wheelchair if he had to in his bid to deliver success for the club’s fans.

“I feel guilty now, about giving the supporters the chance to go to the Premier League,” he said.

“This year from day one it’s been ‘this is the year, we have to go to the Premier League’. That’s how we talk.

“That’s how the fans talked and now we’re so close. If we don’t do it I’ll be sad for a couple of months. In my head, we just have to do it.”

The return leg at Elland Road is next Wednesday and the final at Wembley takes place on May 27.