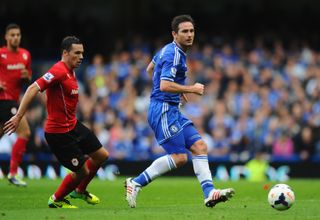 Cardiff initially took the lead at Stamford Bridge through Jordon Mutch in the 10th minute, but the hosts drew level through Eden Hazard towards the end of the half and they went into the break at 1-1.

Oscar replaced Juan Mata just before the hour mark and a few minutes later Samuel Eto’o struck to give Jose Mourinho’s side the lead.

The Brazilian added their third before Hazard completed the scoring eight minutes from time, and Lampard believes the 22-year-old made a telling difference when he came on.

He said: "Oscar came on and added his energy and his quality on the ball. We were looking to step up from half-time though.

"I did feel when we got the second goal we would go on with it and we did.

"We want to stay at the top of the league and we don't want to lose ground. It's difficult but we have got a big squad here."

Mourinho – who was sent to the stands during the match – opted not to attend his post-match press conference, with assistant first-team coach Steve Holland appearing in his stead and relaying the Portuguese's frustrations.

He added: "Jose is very frustrated about the time-wasting. From the first minute, they took a long time to take every dead ball.

"We mentioned it politely to the fourth official and referee. It was a deliberate ploy to break up the game and needed some action.

"It was 56 minutes before their goalkeeper finally received a caution. Jose was furious on the touchlines. For an hour, we'd been frustrated by their clear time-wasting.

"Supporters pay good money to watch a game of football and, from a few minutes in, their restarts were taking longer and longer.

"It's very frustrating for Jose to then be sent off for protesting after we have to throw the ball in within two seconds of getting it."