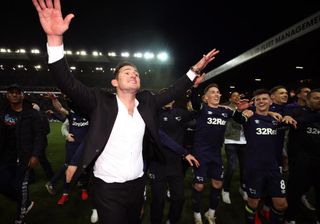 The Rams play Aston Villa in Monday’s Sky Bet Championship play-off final, which is worth an estimated £170million.

In 2003, Lampard’s Chelsea faced Liverpool at Stamford Bridge, with the game labelled ‘the £20million match’ as the winners would qualify for the Champions League.

Chelsea won 2-1 to finish fourth but without Champions League football Roman Abramovich may not have bought the club, who have won five Premier League titles since.

Ahead of the Wembley clash with Villa, Lampard has drawn similarities to that key game 16 years ago.

He said: “If I can match it to something it will be the Chelsea game we played a long time ago just before Roman Abramovich came to the club.

“We had a game against Liverpool to make it to the Champions League. If we lost that game the club was in real trouble, and if we won then things would change. Although we didn’t quite know how well they would change.

“There was tension before that game among the players but I don’t feel that here. It’s a crucial game for the club but what I’ve tried to do is take that away from the players.

Derby, who beat Leeds 4-2 on aggregate in a semi-final, last made the final in 2014 when they suffered a heartbreaking late 1-0 defeat to QPR.

Lampard regularly played at the national stadium for England but admitted it will still have an impact on the players.

“It’s the size of the stadium, it’s what it means, it’s the fans, it’s the feeling, the way your belly will turn over when you get there,” he said.

“That stayed with me many times. It doesn’t go away just because you’ve played so many games. Every player needs to find their own way to manage it.”

It is Lampard’s first season as a manager after being appointed last summer by owner Mel Morris.

Chairman Morris has previously been criticised for his handling of managers but Lampard has no problems.

“Before I came to the club a  lot of people had a story about Mel but there’s never been a truer thing than ‘take as you find’,” he said.

“He has put so much into the club. To see him on the pitch at Leeds, it’s clear what drives Mel. He is desperate to get this club to the Premier League.”