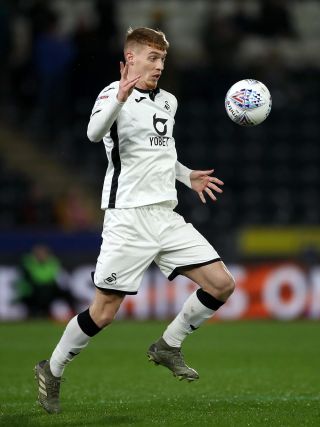 Swansea scored two late goals to get themselves back into play-off contention in the Sky Bet Championship with a 3-1 victory over Huddersfield.

Andre Ayew’s first-half strike put the Welsh side ahead before Chris Willock levelled the scores 12 minutes from time.

However, Jay Fulton rose high to head the hosts back in front moments later, and they were able to relax in stoppage time when Jordon Garrick scored his second goal off the bench in a week.

It was Swansea’s first win in six matches and moved them five points away from a top-six place ahead of Wednesday’s trip to Fulham.

Joe Rodon and Ben Cabango became the first Welsh centre-half pairing to start a league game for the Swans since 1997 after coming in as two of four changes made by manager Steve Cooper.

Winger Aldo Kalulu was handed his first league start since August in place of Bersant Celina, while Rhian Brewster led the line.

Huddersfield’s top scorer Karlan Grant returned after a three-game injury absence, with Fraizer Campbell struck down by illness in the only change to the team that drew with Derby last time out.

Swansea made the breakthrough after 28 minutes when Huddersfield goalkeeper Jonas Lossl palmed Kalulu’s fired cross into the path of Ayew, who diverted into the bottom corner.

The home fans then thought Kyle Naughton had doubled the lead after seeing his shot ripple the side netting, but it was only Ayew’s first goal in six games that separated the teams at half-time.

Having provided the opener, Kalulu almost netted a second two minutes into the second half when he raced in to meet Jake Bidwell’s cross, but he sliced his shot a yard wide.

And they were made to pay as the visitors finally got back on level terms in the 78th minute when Jonathan Hogg worked the ball wide to Willock, who drove to the angle of the box and unleashed a pinpoint drive that hit the far post and went in.

However, it took just two minutes for the Swans to get back ahead and snatch the victory. Matt Grimes curled a corner across the six-yard box for Fulton to rise high and head the ball down and into the corner of the net.

And all three points were secured in the 90th minute thanks to substitute Garrick, who took the ball around Lossl and slotted home after being slipped in by Conor Gallagher to finish a rapid counter attack.