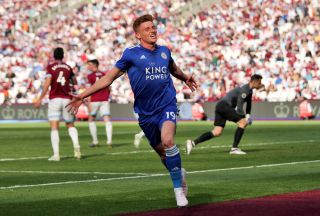 Harvey Barnes pulled the rug out from under West Ham as Leicester snatched a 2-2 draw at the London Stadium.

The 21-year-old substitute grabbed his first Foxes goal in stoppage time to salvage a point for Brendan Rodgers’ side.

It was a lively end to a match which for long periods had all the hallmarks of an end-of-season run in the sunshine.

West Ham laid out their new claret carpet before the game and for much of the first half the two goalkeepers could have brought armchairs along as well, such was the lack of intensity from two mid-table sides.

That changed eight minutes before the interval when Robert Snodgrass sent Mark Noble scuttling down the left.

The Hammers skipper flighted in an inviting cross for Antonio, who got in front of Ben Chilwell and headed powerfully past Schmeichel.

The winger charged off the pitch onto the new track covering and gave it a stroke in celebration.

Not since Aladdin has a carpet had so much attention – the Hammers fans even came up with a song dedicated to it in the second half.

It might not be a magic one but Antonio was certainly flying, giving Foxes left-back Chilwell the runaround in front of watching England boss Gareth Southgate.

However, Leicester equalised in the 67th minute when Harry Maguire fed the overlapping Chilwell down the left.

Chilwell’s low cross was met by former England striker Vardy, who had darted ahead of Fabian Balbuena to get the vital touch at the near post.

It was revitalised Vardy’s seventh goal in seven games since Rodgers took over as Leicester boss.

Substitute Perez thought he had won it when Pedro Obiang’s curler from the edge of the area came back off the foot of the post and fell nicely for the Spaniard to cushion home.

Perez then had the ball in the net again after rounding Kasper Schmeichel but was flagged offside, although replays showed he was in fact level.

It proved crucial as Youri Tielemans sliced the West Ham defence apart with a through-ball and Barnes clipped his shot past Lukasz Fabianski to ensure the Foxes did not head home empty-handed.