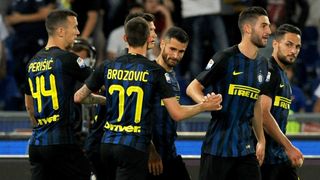 Inter ended an eight-match winless run in Serie A as they came from behind to beat nine-man Lazio 3-1 at the Stadio Olimpico on Sunday.

The visitors headed into the contest knowing European football was beyond them, city rivals AC Milan having earlier wrapped up the final Europa League spot.

But they still produced an impressive fightback to give caretaker boss Stefano Vecchi something to smile about after his first game following Stefano Pioli's exit ended in a 2-1 loss to Sassuolo.

It had looked as if it was going to be another miserable 90 minutes for the Nerazzurri when Keita Balde put Lazio ahead from the penalty spot in the 18th minute.

But Marco Andreolli restored parity and Wesley Hoedt put through his own net as Inter turned the game on its head.

Lazio lost Keita and Senad Lulic in the second half, their dismissals for two bookable offences sandwiching a close-range third from Eder, providing the Inter fans with a rare reason to celebrate.

The opening 17 minutes had seen little incident, but the game was brought to life when Jeison Murillo bundled over Felipe Anderson in the box.

Keita made no mistake from the subsequent spot-kick, powering in despite Samir Handanovic diving the correct way.

Inter had threatened little in the way of a response but levelled 13 minutes later through an unlikely source.

In a rare show of attacking prowess Andreolli got ahead of his marker and headed into the bottom-left corner from Ivan Perisic's flick-on.

And the turnaround was completed in fortunate circumstances six minutes later as Hoedt inadvertently diverted Antonio Candreva's right-wing delivery into his own net.

Another Candreva cross almost resulted in a third for Inter, but Eder was unable to make contact with the goal at his mercy.

Eder curled a free-kick wide two minutes after the restart and wasted a superb chance to make it 3-1 by ballooning over after great work down the right from Candreva.

Inter were almost punished for Eder's profligacy when Keita played in Ciro Immobile, whose fierce effort rattled the crossbar.

Lazio continued to press for the equaliser but were dealt a significant blow as Keita was given his marching orders with two cautions in quick succession.

After being booked for a foul on Candreva in the 61st minute, he saw yellow again in the 66th after he was harshly adjudged to have dived under a challenge in the box from Gary Medel.

And Inter took advantage eight minutes later, Eder atoning for his earlier misses by turning in the rebound after Hoedt had cleared Perisic's goal-bound effort.

Lazio then found themselves two players down as Lulic, having already been booked for picking up a ball that had not gone out of play, saw yellow for the second time for a foul on Roberto Gagliardini.

From that point there was no way back for the depleted hosts, and they were perhaps fortunate not to concede a fourth when substitute Andrea Pinamonti volleyed narrowly wide late on.