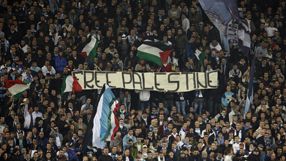 UEFA said the Italian hosts had been charged over racist chanting by their fans, missile-throwing and also because their team arrived late at the Stadio Olimpico. The Group J match ended 0-0.

"Charges relate to the alleged racist behaviour of Lazio supporters... proceedings will also be instigated against Lazio for throwing of missiles and/or fireworks by their supporters, incidents of a non-sporting nature, late team arrival at the stadium, and late handling of the team sheet," said UEFA.

Tottenham have a large contingent of Jewish supporters while Lazio have long had fans with extreme right-wing sympathies.

There was also trouble on the eve of the match.

Ten Tottenham supporters were injured, one of them seriously, during an attack in Rome.

The 10, nine British and one American, were attacked outside a pub near the centre of the city by dozens of masked men.

UEFA fined Lazio 40,000 euros for racist chanting directed at black players in the previous match against Tottenham in London in September.