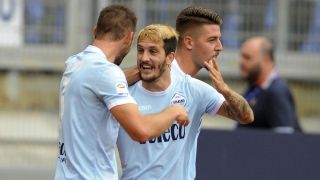 Lazio are playing the best football in Italy and deserve to have bigger crowds at their home games, according to sporting director Igli Tare.

Simone Inzaghi's side, who beat Juventus to win the Supercoppa Italiana in August, have enjoyed a hugely impressive start to the 2017-18 season.

The capital club have won eight of their 10 games in Serie A and the Europa League, suffering just one defeat to league leaders Napoli, and their 6-1 thrashing of Sassuolo on Sunday has kept them to within five points of the top.

Tare is frustrated that Lazio's form is viewed by some as a surprise and has urged fans to start filling the Stadio Olimpico to help them reach the next level.

"It's irritating that people keep saying Lazio are the surprise of Serie A," he told Mediaset Premium. "This team isn't a surprise now. We've improved the project year by year and are now reaping the rewards.

"Juve, Napoli, Inter and Roma have a winning mentality and quality players. Lazio are reaching these levels.

"Now, we need more fans in the stadium because it's sad that Lazio play fantastic football, probably the best football in Italy at the moment, but with an attendance that leaves a lot to be desired."

13 - Only Messi has scored more than (13) this season in all club comps among players of the top-5 Euro leagues. Responsibility. October 2, 2017

After the international break, Lazio face Juve away from home in the top flight before taking on Nice in France in the Europa League.