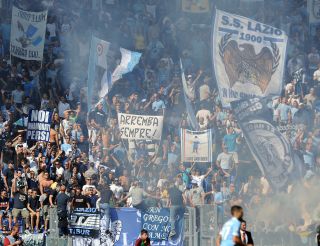 The Serie A club welcome the Cypriot side to the Stadio Olimpico on November 7 and had previously been ordered to play the clash behind closed doors.

UEFA imposed the ban after fans were found to have chanted racial epithets during their home game with Legia Warsaw on September 19.

The Rome outfit were also fined €40,000 for the behaviour of their supporters, who were alleged to have lit fireworks and displayed offensive banners.

However, a lesser punishment is now in place after Lazio confirmed that only the Curva Nord section of the venue will be closed for the meeting with the Limassol club.

A statement on the club's official website read: "SS Lazio announces that, during the Europa League match against Apollon Limassol, scheduled for November 7 at the Olympic Stadium in Rome, only the Curva Nord section will be closed."

The Curva Nord section has already been shut once this season as fans were banned for the league contest with Udinese on August 25 after racially abusing Juventus players during their 4-0 Italian Super Cup loss to the Serie A champions earlier that month.

Vladimir Petkovic's men sit top of Group J in the Europa League ahead of their trip to Apollon on Thursday.