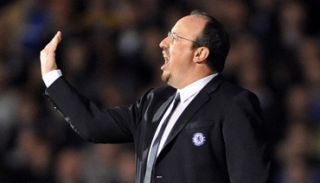 The Spaniard has since been unable to win over supporters he initially riled during his tenure at Liverpool, when he suggested the Anfield club had a more passionate fanbase.

After a slow start, during which time Chelsea supporters protested vociferously against Benitez’s appointment, his team have found their form. The Blues have moved up into third place in the Premier League thanks to a run of five wins in seven, also qualifying for the Europa League final, where they will face Benfica in Amsterdam on May 15.

Le Saux, who played more than 250 matches for Chelsea across two spells in West London, explained to FourFourTwo that winning the Europa League, combined with a return to next season’s Champions League, would represent a relatively successful campaign for the Spaniard and his team.

"Winning the Europa League and finishing in the top four would constitute a successful season for Rafa Benitez, not least because the team have played so many games this season,” Le Saux said.

“That’s meant the manager has had to rotate players in and out of the team while maintaining some continuity and consistency with results.

"That also takes huge responsibility from the players, because they’ve had to accept they won’t play every game and that the team will change from match to match.”

Although Benitez still appears to be far from popular with Chelsea fans, the critical reaction to his appointment at least appears to have lessened.

“The atmosphere last night [in the Europa League semi-final second leg against Basel] was excellent - much better than when Rafa first took over,” Le Saux said.

"Everybody accepts that the fans will make their voices heard, that’s perfectly normal, but there came a point in the season when even the most staunch Chelsea fans changed their opinions, or at least learned to accept the situation - and they’ll be the first ones booking their tickets for Amsterdam."

Despite this easing of tensions, many fans would still be dead-set against Benitez’s reign continuing into the 2013/14 season, especially since former manager Jose Mourinho hinted he would be willing to return to the club following his Real Madrid side’s Champions League exit on Tuesday.

But Le Saux, who left Stamford Bridge 12 months prior to the Portuguese’s arrival, said speculation should be saved for the close season. The Channel Islander also suggested the club may decide to stick with Benitez, despite fans’ protestations.

"It's amazing how much people are speculating on who the next manager is going to be. I always believe you have to respect the current manager, and he has to think about the opportunities that lie ahead for him and the team between now and the end of the season.

“Jose Mourinho saying he wants to go somewhere he is loved, is typical Jose, isn’t it? He’s got a huge amount of attention around his departure from Real Madrid, and he'll try and do the best for himself. It’s up to him and the clubs interested to negotiate a deal that suits everybody.

“Whether he’ll end up at Chelsea, I’m not willing to speculate, but if he does end up back at Stamford Bridge it will bring a smile to a lot of people’s faces. There would certainly be a huge group of journalists