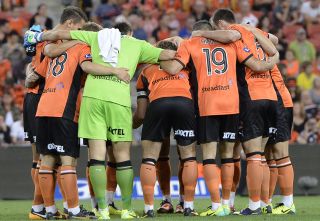 Mike Mulvey's men fell to a 1-0 loss to Melbourne Victory on Friday night, in what was former Roar man Ange Postecoglou's last match in charge of the Victorian team.

But they have a good chance to find their form at home to Heart this weekend, with John Aloisi's side winless in three this season.

From five trips to Roar's Suncorp Stadium, Heart have won only once - their first in December 2011 - losing three of the next four since.

Despite their form on paper looking a bit shoddy, Heart really should have more points on the board than their two from three games.

They were pegged back to a draw at home to Central Coast courtesy of two penalties to the Mariners, the first of which was dubious, before conceding their first goal from open play in their last-start loss to Perth Glory.

Kicking off round four will be Western Sydney Wanderers' hosting of Adelaide United in Parramatta on Friday night.

The Wanderers chalked up their first victory of the season last week, as they look to defend their Premiers' Plate won in their inaugural campaign, with a 2-0 derby win over Sydney FC.

Josep Gombau's Adelaide United have begun the season in inconsistent fashion with a win, a draw and a loss - most recently on the wrong end of a 1-0 result away to the Mariners.

Fresh from their first victory this season, Perth can make it two from two when they host an out-of-sorts Sydney FC on Saturday afternoon.

Newcastle Jets are still chasing their first goal of the season, when they welcome the Mariners to Hunter Stadium for the F3 derby on Saturday night.

Finally, the Victory round out the round in a rare Monday fixture, as they host Wellington Phoenix at Etihad Stadium.