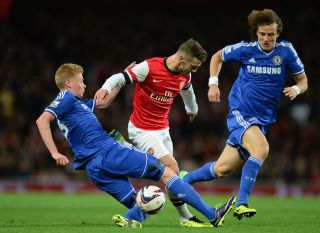 Arsenal boss Wenger had failed to secure a victory over a Chelsea side managed by Mourinho in eight attempts before Tuesday night's clash between the top two in the Premier League at the Emirates Stadium.

And Mourinho, taking charge of his 200th game as Chelsea manager, stretched that run to nine as Cesar Azpilicueta scored his first goal for the club following a mistake from Carl Jenkinson and Juan Mata opened his account for the season to give the visitors another London derby victory.

In-form Chelsea have now won their last five games in all competitions and they were good value for their victory against a more inexperienced Arsenal side.

Mourinho vowed to make wholesale changes with the game just two days after Chelsea's Premier League win over Manchester City and he was true to his word, as only Gary Cahill kept his place in the starting line-up.

Wenger also made full use of his Arsenal squad as Laurent Koscielny, Aaron Ramsey and Santi Cazorla were the only players who started the 2-0 victory against Crystal Palace on Saturday to stay in the side.

Such is the strength of Chelsea's squad that they still had plenty of experience in their side and they looked more threatening in the opening stages before they were gifted the lead after 24 minutes.

Jenkinson was the culprit as he hesitated and let the ball bounce before attempting to head back to Lukasz Fabianski, only for marauding full-back Azpilicueta to nip in and poke the ball beyond the Polish goalkeeper with a finish a striker would have been proud of.

The defender almost undid his good work four minutes later when his poor pass was cut out by fellow Spaniard Nacho Monreal, who let fly with a left-foot drive that flashed just past the far post.

Samuel Eto'o had the first sight of goal in the second half but the Chelsea striker fired his shot from 20 yards out wide.

Wenger brought on playmaker Mesut Ozil with just over 25 minutes remaining, but Arsenal were left with a mountain to climb just a couple of minutes later when the ball fell for Mata just outside the penalty area and the Spaniard beat Fabianski with a clinical right-foot finish to notch his first goal of the season.

Koscielny had to clear off the line to deny Ramires a third goal and the Brazil midfielder had a shot that landed on top of the net as 9,000 Chelsea fans behind the goal celebrated reaching the last eight.