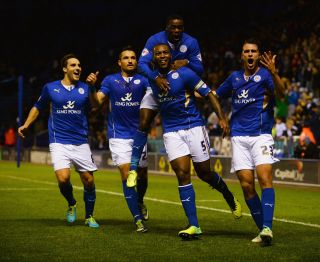 Fulham struck first through Hugo Rodallega's close-range strike but two goals in the last four minutes of the first half from Wes Morgan and Chris Wood put Leicester in the ascendancy.

Giorgos Karagounis' stunning free-kick looked to have forced extra time but Dyer's late intervention gave Leicester their eighth straight home win in all competitions and a place in the fifth round for the first time since 2000.

The result will put more pressure on Jol, whose side languish in the bottom half of the Premier League with fixtures against Manchester United and Liverpool to come.

Jol made wholesale changes to the side beaten by Southampton at the weekend, with just Maarten Stekelenburg and Philippe Senderos retained.

After a tentative opening, it was the Premier League side who showed their class after 18 minutes to take the lead.

John Arne Riise burst down the left and his cross was cleverly dummied by Adel Taarabt for Rodallega, who sprung the offside trap and tapped home his second of the season.

Leicester went in to the game with the best home record in the Championship and showed their intent after 35 minutes when Anthony Knockaert's fierce drive was spilled by Stekelenburg, who made amends by blocking the Frenchman's follow-up, while Paul Konchesky could only volley the rebound over from a tight angle.

And they got a deserved equaliser four minutes from the break as centre-back Morgan showed predatory instincts to nod home his first of the campaign after Stekelenburg spilled Knockaert's free-kick.

Fulham were clearly rattled and pressed the self-destruct button on the stroke of half time as Senderos hit a clearance straight against Konchesky and Wood was on hand to slide in at the near post.

The game swung one way and the other within 46 second-half seconds. First, Leicester grabbed a third after 51 minutes when Drinkwater's near-post cross was converted by Miquel's bullet header but Fulham went straight up the other end and netted when Elsad Zverotic's deep cross was powered home by the head of Rodallega.

The game continued at a break-neck pace with Derek Boateng narrowly heading wide, Wood forcing a fine stop from Stekelenburg and Bryan Ruiz going close, only to be denied from point-blank range by Kasper Schmeichel.

Fulham continued to press and were rewarded four minutes from time through a Karagounis free-kick that found Schmeichel's top corner.

But just when extra time looked a certainty, substitutes David Nugent and Dyer combined for the latter to slide in and provide a fourth-round giant killing.