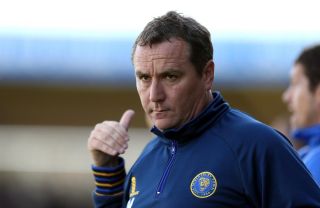 The League Two side travel to the King Power Stadium on Tuesday with two wins and two draws from their opening four league games and a 1-0 victory over Championship side Blackpool in the first round.

It has been a great start for Mellon since he replaced Michael Jackson following the club's relegation from League One last season, but he knows a first-ever meeting with Premier League new boys Leicester will provide a major test of their progress.

"It's a game we're looking forward to," he told the club's official website. "It's great that the club have a trip to a Premier League side to look forward to so we'll see where we are on the night.

Nigel Pearson's side have performed admirably in the first two matches of the Premier League campaign, picking up a late point against Everton and holding Chelsea for over an hour before losing 2-0 at Stamford Bridge on Saturday.

The City boss is sure to rotate his squad for the second round tie to give some of those players yet to feature in the league a chance to shine.

Marc Albrighton's recovery from a groin strain should see him start having come on as a late substitute on Saturday while another new signing, Ben Hamer, could start in goal to allow Kasper Schmeichel a rest.

Dean Hammond was substituted during the defeat to Chelsea with severe cramp, so may not be risked while Matthew Upson (ankle), Danny Drinkwater (hamstring) and Matty James (calf) did not feature.

Mellon also has a selection headache following the sending off of captain Liam Lawrence in their 1-1 draw with Northampton Town on Saturday.

To add to Mellon's problems he saw strikers Ashley Vincent and Andy Mangan hobble off at Sixfields, with the latter a big loss after three goals in four league matches since moving from Forest Green Rovers.