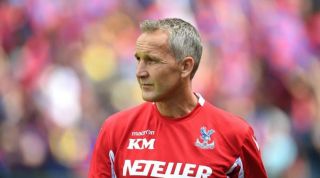 Having lost manager Tony Pulis two days before a defeat at Arsenal on the opening day of the Premier League season, Palace became embroiled in another saga just as Malky Mackay looked set to become his successor prior to Saturday's home loss to West Ham.

Sporting director Iain Moody resigned following allegations of misconduct made against him and Mackay during their time at Cardiff City and Tim Sherwood then also claimed he turned down the chance to replace Pulis.

Joe Ledley then joined Scott Dann on the injured list when tweaking his groin in the warm-up and it is unlikely either will be available at Walsall.

Millen admitted his side were "flat" and "lacklustre" against Sam Allardyce's men and will be seeking a quick response when taking on League One opponents at Bescot Stadium in the second round.

"I don't like to make excuses, but it was a tough week for the players," said Millen. "I tried to play it down beforehand because in training they had been fine, but when you come to match day you're never quite sure how they are going to respond, so whether that had any bearing, I don't know.

"But we've got a lot of work to do, with the transfer window closing next Monday, as everyone knows we need to strengthen our squad, and we've got the cup game on Tuesday to deal with - so there's never a dull moment.

"We've got to take things on a day-to-day basis, so I'll pick a team for Walsall. We've got a good squad, there are players that need to play, so we will make some changes and hopefully get a result.

"It's another tough week because we've got the cup game and then we've got to go to Newcastle on Saturday, so we've got a bit of travelling but we'll prepare the lads - they'll be disappointed from Saturday but I know this lot, they'll bounce back."

Millen is convinced co-chairman Steve Parish will not press the panic button in the search for a replacement for Pulis, with bringing in new recruits of equal importance as the transfer window comes to a close.

"If the chairman doesn't find the right person, I don't think he'll rush into it," added Millen. "He hasn't done that before and he won't do it again

"It's been a shock to everyone, the circumstances of Tony leaving, then the situation last Wednesday and Thursday with Malky, so it's been a tough week, but I don't think it's going to drag on. Once we appoint a new manager, it'll be a fresh start and I think we'll have a new direction in where we want to go.

"But we've got a good group of players; the majority from last year are still here and we've actually strengthened, so if we can bring some more in before Monday we'll have a decent squad with which to move forward.

"We know what positions need strengthening and the chairman has got a list of possible players and is working on them."

Walsall edged out Southend United 2-1 in the first round, but have failed to win any of their first four fixtures in League One - securing a third draw in Saturday's goalless stalemate at Leyton Orient.