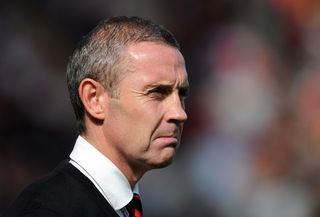 David Weir's men have not won in the league since the opening day and the Scot finds himself under more pressure after bowing out in the Johnstone’s Paint Trophy with a 1-0 loss to League Two Hartlepool United on Tuesday.

Any hopes of getting back on track at Sixfields this weekend are offset by the fact that Coventry have lost just one of their opening five league games at their temporary home, with Brentford the only team to defeat them last month.

Both Tranmere Rovers and Stevenage Borough are also in sorry shape with 10 games played and find themselves in the bottom four alongside Sheffield United ahead of fixtures against Bradford City and Brentford respectively.

Leyton Orient’s quest for the weekend, on the other hand, is significantly more positive with Russell Slade hoping his men can continue the only remaining unbeaten start in League One when they play host to MK Dons on Saturday.

The London side won their opening eight league games and have drawn the last two against Oldham Athletic and Walsall, and will be looking to David Mooney to continue his blistering form.

The 28-year-old is just one goal away from doubling last season’s tally, with the striker having netted nine times in the league so far, including braces against both Port Vale and Shrewsbury Town.

One point behind Orient are Peterborough United, for whom forward Britt Assombalonga is hoping to end a four-game barren spell in front of goal after an explosive start to the season.

The youngster joined from Watford in July for a club-record fee and raced to seven league goals. Next up for Peterborough is a trip to Port Vale.

Both Preston North End and Rotherham United are in the play-off pack and will look to keep the pressure on the teams above them when they host Crewe Alexandra and Swindon Town.

Crewe will be desperate to bring something back from their visit to Deepdale, though, with Steve Davis’ men having failed to clinch a league win since mid-August 17.

Also struggling with their form away from home this season are Gillingham, whose one win on the road was at Crewe at the end of September, and they will aim to build on that momentum when they visit Shrewsbury Town on Saturday.

Elsewhere in the weekend’s action, Colchester United will look for their first win since August 10 when they face Walsall.