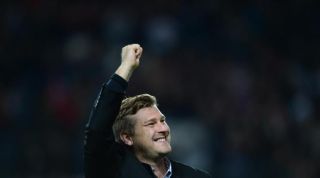 Karl Robinson's men pulled off the biggest result in their short history on Tuesday as braces from Will Grigg and Benik Afobe gave the 10-year-old club a memorable triumph over the beleaguered Premier League giants.

And it is another set of Red Devils who visit stadium:mk this weekend, with Crawley Town looking to bring their hosts back down to earth with an almighty bump.

MK Dons' league form has been steady so far this season - winning two and losing one before being held to a goalless draw by Coventry City last weekend - and they welcome a Crawley side who have followed up back-to-back victories with two defeats on the bounce.

Despite their win over United on Tuesday, Dons manager Robinson says celebrations will be put on hold until his players pull off a Red Devil double.

"We have a massive game on Saturday, so we need to take stock," he said.

"We have no game after that for two weeks, so if we win on Saturday, the players can go out and have as many nights out as they want in the following 10 days."

Leaders Fleetwood Town have made a fantastic start to life in League One, but failed to win for the first time this season when they were held 0-0 by fellow new boys Chesterfield last weekend.

Leyton Orient are the visitors at Highbury on Saturday and will be keen to build on their own giant-killing exploits after knocking Aston Villa out of the League Cup.

Another League One side to send Premier League opposition crashing out at the second round were Sheffield United, who beat West Ham, and Nigel Clough will be bidding for four consecutive wins in all competitions at Preston North End.

Peterborough United and Bristol City are among the early frontrunners in the division and face Colchester United and Notts County respectively this weekend.

The season may only be four matches old, but the outlook is already beginning to look bleak for Crewe Alexandra, who sit rock bottom with no points.

Crewe travel to Gillingham on Saturday hoping to get off the mark.

In contrast to Fleetwood, who sit top of the division, Scunthorpe United have endured a more difficult introduction to League One since winning promotion.

A 1-1 draw at Yeovil Town saw Russ Wilcox's men pick up their first point of the season and they will be aiming to go one better at home to Walsall.