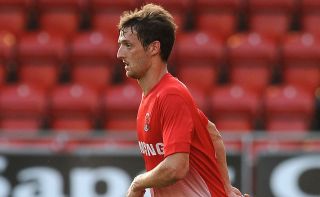 Russell Slade's side have won all four of their league games and boast an in-form striker in the shape of David Mooney, who has scored four goals so far this season.
Colchester are also in good form but, after two wins in the opening two games, have been held in their last two matches.

However, history suggests that John Ward's men will get a positive result against Orient, as the Londoners have not won a league fixture at Colchester in 19 attempts and lost both matches against them last season.

Like Orient, second-placed Peterborough United are also aiming to record a fifth straight win when they welcome Crawley Town to London Road and confidence will be high after thrashing Reading 6-0 in the League Cup second round on Tuesday.

The two sides have never met before, but Darren Ferguson will be confident given his side's eye for goal this season, as Peterborough have scored 12 in their opening four league matches.

After last season's play-off heartbreak, Brentford have begun the new campaign well and find themselves in fourth place and unbeaten.

They managed to pick up their first point of the season against Colchester, but have not won at home since the two sides last met in March and have conceded nine goals in their previous two league home fixtures.

Coventry City - who began the season on minus 10 points - could wipe out that deficit with victory over Shrewsbury Town.

Steven Pressley's side are top scorers in the division so far with 15 goals in their four games - with Leon Clarke and Callum Wilson looking sharp in front of goal.

Following their promotion last season, Bradford City have adjusted to life in League One well, as they are yet to be beaten and will be aiming to extend that run away to Stevenage.

Striker Nakhi Wells will provide the main threat to Graham Westley's side - the Bermuda international leads the way in the division's scoring charts with five goals.

Wolves have won three games in a row since their opening-day draw with Preston North End, and they head to newly promoted Port Vale.

The two sides have not met since 2000, when Wolves won 1-0 at Vale Park thanks to a Carl Robinson strike.

Sheffield United's start to the season has taken a turn for the worse since their opening-day victory over Notts County, as they have not won since and lost their Yorkshire derby against Bradford last time out.

Chris Morgan will hope his side can get back to winning ways when they entertain Karl Robinson's MK Dons at Bramall Lane.

Elsewhere, Notts County and Tranmere Rovers all go in search of their first win against Rotherham United and Oldham Athletic respectively. Both County and Tranmere produced spirited displays in the League Cup in midweek - Tranmere beat Bolton Wanderers on penalties and County hauled themselves level having been 2-0 down against Liverpool before losing 4-2 at Anfield.

Two of the bottom four go head-to-head at Priestfield as Bristol City travel to Gillingham in a repeat of their League Cup first-round tie earlier in the month - a game City won 2-0. City also defeated Premier League side Crystal Palace in the second round on Tuesday.

Meanwhile, Preston travel to Walsall and Swindon Town welcome Crewe Alexandra to the County Ground fresh from their League Cup victory at QPR that set up a third-round home clash against Chelsea.