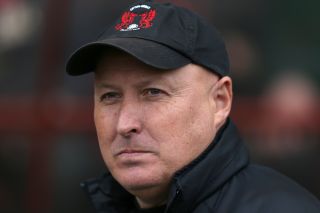 The visitors went to the Matchroom Stadium looking to boost their promotion hopes by moving into the play-off places, but in the end they slipped down to 10th.

Kevin Lisbie struck the match's solitary goal in the 29th minute to move Orient on to 35 points, while Rotherham end the weekend with 15 less than the table-toppers.

Wolverhampton Wanderers are within touching distance of Orient as they triumphed 2-1 at Bradford City and moved into second.

Raffaele De Vita gave the hosts a 14th-minute lead, but goals from James Henry and Richard Stearman around the half-hour mark were enough for Wolves, who sit three points behind Orient with a game in hand.

Peterborough United dropped down into third due to a 1-0 defeat at Colchester United, with Lee Tomlin picking up a red card against his former team after an off-the-ball altercation with Craig Eastmond.

The hosts made the most of their numerical advantage as Macauley Bonne struck in the 70th minute and they moved up to 14th place.

Preston North End picked up their fourth league away win of the season as they beat strugglers Notts County 1-0. Iain Hume scored the game's only goal 16 minutes from time as Preston moved up to fourth.

Brentford consolidated their place in the top six with a 1-0 home win over Shewsbury Town, while MK Dons' attempt to close in on the play-off places was halted by a 3-2 defeat at Tranmere Rovers.

Walsall stay in seventh after suffering a surprise 1-0 home loss to Coventry City, while Swindon Town remain just below them following their 2-1 defeat at Oldham Athletic.

Bristol City picked up their first league win of the season to move off the bottom of the league as a Jay Emmanuel-Thomas hat-trick inspired them to a 4-2 triumph over Carlisle United, but Crewe Alexandra lost again as Sheffield United beat them 3-1.

Port Vale were victorious against Gillingham as they won 2-1 to move up to ninth, while Crawley Town suffered a second consecutive league loss as their hosts Stevenage cruised to a 2-0 win.