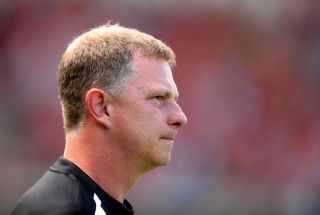 Robins was officially appointed as Russ Wilcox's successor at Glanford Park in midweek, having watched their win over Gillingham from the stands.

While his first game in charge began well on Saturday, courtesy of Rory Fallon's 20th-minute opener, the hosts were pegged back through Freddy Sears' effort shortly after the half-hour mark.

With Scunthorpe unable to regain the lead, Robins was clear that a marked improvement was required from his new side.

"There was some decent play at times but where we are now is a long way away from where I want us to be," he told the club's official website.

"We've had three days in terms of work and I expected us to be there at this moment in time.

"It gives us plenty of food for thought."

Scunthorpe's draw leaves them just a point above bottom side Crewe Alexandra, who made it back-to-back wins courtesy of Adam Dugdale's late winner at Walsall.

At the summit, the top two of Bristol City and Peterborough United pulled further clear with wins over Coventry City and Barnsley respectively.

With the two sides matching themselves win for win at the top, third-place Swindon Town slipped further off the pace as they needed Andy Williams' late equaliser to return from Yeovil with a point.

Fleetwood maintained their unbeaten home league record this term with a 3-1 win over Doncaster Rovers, while Cody McDonald rescued a point for Gillingham away at Rochdale.

Bradford City lost their second Yorkshire derby in six days after a 2-0 defeat to Sheffield United in the day's late game at Valley Parade - Robert Harris and Mark McNulty on target for Nigel Clough's men.