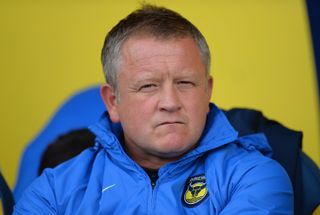 Chris Wilder's men are unbeaten in their last four league matches and moved into first place after beating AFC Wimbledon, while Rochdale lost at Dagenham and Redbridge in the respective teams' last fixtures.

With both sides on 26 points, only goal difference gives Oxford a lead over Rochdale, but Wilder's team will be confident of staying at the top of the table when they welcome Rovers, who are winless in their last nine league matches.

Wilder is not getting carried away, however.

He said: "It is a completely unpredictable league so we just have to make sure we keep our part of the bargain and keep the hammer down.

"Everything about the performance (in the 2-0 win over Wimbledon) was good and the only thing I was unhappy about was the last 10 minutes when we put undue pressure on ourselves by giving the ball away.

"We have worked hard to get top and that is why we are in that position. We are a hard-working side and we were lucky that our defenders kept up their side of the deal."

Rochdale host Wimbledon as they look to keep pace with Oxford and with their visitors winless in their last six league matches, Keith Hill's team will be expected to pick up three points.

Fleetwood Town go into the weekend just one point behind the top two ahead of a potentially tricky home test against Newport County, who in turn will be looking to improve their position in the play-offs.

Tied on 25 points with Fleetwood are Chesterfield, but after an excellent start to the season they have failed to win in their last six league games and eighth-placed Scunthorpe United will the side hoping to capitalise against them this weekend.

Friday's meeting sees Mansfield Town travel to Southend United as both sides look to make a leap towards the top seven, but the away team have not won in five.

Portsmouth will be aiming to extend their unbeaten run to five games when fifth-placed Exeter City come to town, while Morecambe head to Burton Albion.

Keeping seven-goal Ryan Jarvis quiet will be Cheltenham Town's chief task when York City visit, while Hartlepool United have to contend with the league’s top scorer Rhys Murphy as they welcome Dagenham and Redbridge.