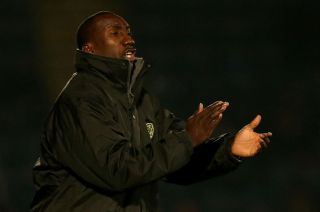 Burton missed out on the opportunity to go top of League Two as they were held to a 1-1 draw at York City on Saturday.

Things could have been even worse for Burton, however, as debutant Emile Sinclair netted in the 70th minute to seemingly give the home side all three points.

But Adam McGurk rescued a point three minutes from time, with Burton ultimately slipping down a place to third, failing to capitalise on leaders Wycombe Wanderers themselves only managing a draw.

Wycombe made the trip to Mansfield Town and the two teams played out a goalless stalemate, meaning Gareth Ainsworth's men remain top.

Shrewsbury Town made the most of Wycombe and Burton dropping points by coming out on top in a five-goal thriller against play-off hopefuls Stevenage, moving up to second as a result.

But it was by no means straightforward for Shrewsbury before Jamie Collins made it 3-2 two minutes from time.

In an ill-tempered affair that saw Barry Corr and Paul McCallum sent off at the death, Southend United strengthened their position in the play-off places with a 2-1 victory at Portsmouth, while Luton Town stay ahead of them on goal difference after drawing 1-1 at Cheltenham Town.

Rock-bottom Hartlepool United earned a 1-1 draw at fellow strugglers Tranmere Rovers and Carlisle United lost 2-1 at Bury thanks to a Daniel Nardiello brace.

Oxford United and Plymouth Argyle both dropped points at home, with Exeter City and Morecambe coming away with 1-1 and 2-2 draws respectively.