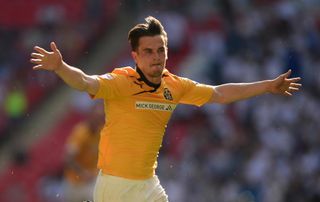 Tom Elliott netted twice, while Ryan Donaldson scored a goal of his own as 13th-placed Cambridge snapped a three-game losing streak.

Lucas Akins grabbed a later consolation for Burton, who failed to build on their one-point lead through 11 matches.

Burton had only assumed control at the summit last week, when rivals Bury lost at Exeter City.

But Burton's stay at the top of the table could be short-lived after suffering their third defeat in four matches.

Dunk was in the thick of the action in the 64th minute as he set-up Donaldson for Cambridge's second.

It got better for the visitors 12 minutes later, when Elliott teamed up with Kwesi Appiah.

Akins pulled a goal back for the home side with nine minutes remaining but Cambridge were not to be denied.

"I have to say the first goal was a really poor one to concede," Burton coach Gary Rowett told BBC Radio Derby.

"When you do that, you give the opposition a really good opportunity to just sit in and make it hard as they can just keep trying to pick counter attacks.

"We had nearly all of the ball after that. We put lots of ball into their box, but our full-backs and our wide players didn't show enough desire to get on the end of things, so it was disappointing all over."

Exeter trailed for most of the contest after Jamie Cureton had given Dagenham an 11th-minute lead.

But the visitors were offered a lifeline nine minutes from time when Alex Nicholls was fouled inside the penalty area and Jimmy Keohane made no mistake from the spot.

The dramatic fightback was completed by Davies, who headed into the top corner.