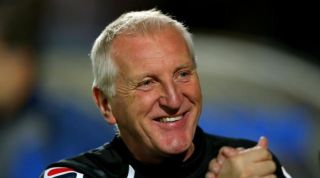 Ronnie Moore collected his first win at the helm as goals in either half from Scott Fenwick and Rakish Bingham secured Hartlepool's first home league triumph since September 7.

While Hartlepool remain at the foot of the Football League, Cheltenham slip to 18th but are 11 points ahead of Moore's side.

Tranmere Rovers occupy the other relegation spot following a goalless draw at Morecambe, but Carlisle United's troubles deepened with a 1-0 loss to Cambridge United at Brunton Park.

Keith Curle's charges have now lost three on the bounce, leaving them one point above the drop zone, while Cambridge - who were indebted to Liam Hughes' second-half goal - ended a four-match winless run in the league at the end of a week in which they drew Manchester United in the FA Cup.

At the other end of table, Fred Onyedinma made it two goals in as many games to hand leaders Wycombe Wanderers a 1-0 at home to York City, keeping them a point ahead of Burton Albion who survived a second-half fightback to triumph 2-1 against Mansfield Town.

Struggling Northampton Town put a surprise dent in the promotion hopes of Exeter City with a 2-0 win in Devon, while third-placed Newport County recorded a controversial 1-0 success at home to AFC Wimbledon.

Michael Byrne's low drive from outside the box was initially ruled out by the linesman, only for that decision to be overturned by referee Michael Bull, handing the hosts a boost in their search for automatic promotion.

Stevenage extended their unbeaten run to five games with a 2-1 win at home to AFC Wimbledon to move to within a point of the play-off positions.

Tom Pett gave the hosts the lead with a drilled finish from close range after 32 minutes, before George Francomb levelled three minutes later.

But the win was wrapped up 21 minutes from time when Simon Walton slotted home from the spot after Dean Wells had been brought down by Deji Oshilaja.

Meanwhile, Dagenham and Redbridge played out a 0-0 draw against Oxford United, while Southend United versus Plymouth Argyle also ended goalless.