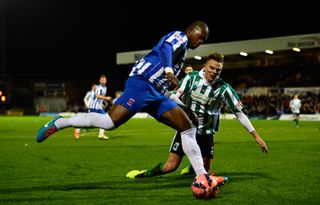 The visitors fared well right up until the stroke of half-time, when Alex MacDonald broke the deadlock for Jimmy Floyd Hasselbaink's side.

MacDonald netted again 25 seconds into the second half, with Shane Cansdell-Sherriff and Stuart Beavon completing the rout.

Tranmere Rovers climbed out of the relegation zone with a 1-0 win at Dagenham and Redbridge, as Carlisle United - beaten 2-0 at in-form Exeter City - slipped down to 23rd.

At the top end of the table, Burton's win took them into second as Shrewsbury Town's goalless draw at Cambridge United saw them drop to third.

There was no such slip-up from leaders Wycombe Wanderers, who shrugged off the setback of conceding early to beat Southend United 4-1 at home.

Goals from Joe Jacobson and Matt McClure wrapped up the points in one of four five-goal thrillers in the division.

York City, Portsmouth and Northampton Town all lost 3-2 on home soil to remain in the bottom half of the table.

AFC Wimbledon added to their FA Cup success over York with another triumph, while two late Northampton goals were not enough to prevent a defeat against fifth-placed Plymouth Argyle, and Accrington Stanley earned maximum points at Fratton Park.