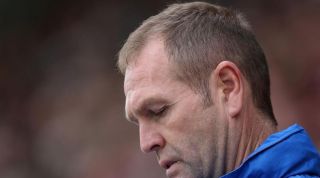 Leaders Scunthorpe went into Monday's fixture needing to win and both Fleetwood Town and Burton Albion to drop points in their respective matches to secure automatic promotion, but although Burton drew at Newport County, Fleetwood beat Wycombe Wanderers.

Scunthorpe did take another giant stride towards a return to League One though, as Matthew Sparrow scored the only goal 15 minutes in to secure all three points as the home side extended their stunning unbeaten run to 28 league matches.

That victory simultaneously did York a huge favour as they battle with Oxford for a play-off place.

Nigel Worthington's side scraped a narrow 1-0 home victory against Bury, with the all-important goal coming after just five minutes from Keith Lowe.

Daniel Nardiello made Bury's task even tougher with nine minutes to go as he was shown a second yellow card and York – who are now unbeaten in 15 games – held on to go five points clear of Oxford with just two games remaining.

Fifth-placed Southend United have all-but clinched a play-off spot after they edged out Accrington Stanley 1-0 courtesy of Barry Corr's strike, with Phil Brown's men now having a six-point lead over Oxford and a better goal difference.

Fleetwood kept their automatic promotion hopes alive with a narrow 1-0 win over relegation-threatened Wycombe Wanderers, but they did so against the odds following Alan Goodall's 13th-minute red card.

Burton's chances of going up without featuring in the play-offs are almost certainly over following their 1-1 draw at Newport County and they now sit six points behind third-placed Rochdale and Chesterfield in second - with both of those sides having a higher goal difference.

Chesterfield kept the pressure on Scunthorpe in the title race as they defeated hosts Dagenham and Redbridge 1-0, while Rochdale ended a four-game winless run to stay level with the Derbyshire side on 78 points by beating Bristol Rovers 2-1 on the road,

Rovers are perilously close to the drop zone going into the final two games of the season, as they only remain above second-bottom Northampton Town on goal difference after Chris Wilder's side lost 1-0 at home to Portsmouth.

Torquay United live to fight another day after securing a precious 2-1 derby win at Exeter City, but they still look destined to drop out of the Football League as they are five points adrift of Northampton, Rovers and Wycombe.

Exeter are also in danger of going down, as are Morecambe after losing 2-1 at Hartlepool United, who are now five points clear of the drop zone and look set to stay up.

Plymouth Argyle lost 2-1 at home to AFC Wimbledon in a mid-table clash, while Cheltenham Town beat Mansfield Town 2-0 in another meeting between two sides who have only pride to play for.