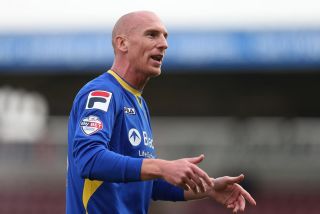 Having defeated Dagenham and Redbridge and Newport County in their opening two league encounters, Morecambe saw off the challenge of Oxford United at the Globe Arena.

Kevin Ellison broke the deadlock six minutes before the break and that proved enough for Jim Bentley's men to remain top of the table on goal difference.

Burton were defeated in the play-off final last term, but Gary Rowett's side have bounced back well in the early throes of the new campaign.

Stuart Beavon settled their clash with Exeter City at the Pirelli Stadium four minutes before the interval.

Accrington's cause was hindered by a red card for goalkeeper Luke Simpson for bringing down Mangan in the area shortly before the break, with Jean-Louis Akpa Akpro converting the penalty.

AFC Wimbledon and Cheltenham Town have also yet to taste defeat, the former triumphed 1-0 at Southend United while the latter were held to a goalless draw by Carlisle United.

York City had conceded 90th-minute goals in all three previous matches across all competitions this season, but this time they needed a late goal to draw 2-2 at home to Cambridge United.

Tom Elliot and a Kwesi Appiah penalty put the visitors 2-0 ahead before Jake Hyde halved the deficit shortly before half-time.

A spot-kick from Wes Fletcher in the 82nd minute then helped York to a share of the spoils.

Hartlepool United remain without a point - or a goal - as they were beaten 2-0 at home by Dagenham and Redbridge, who won for the first time this season.

Luton Town and Plymouth Argyle were held to 1-1 draws at home by Bury and Stevenage respectively, while an early goal from Christopher Clements helped Mansfield Town beat Newport County 1-0.

Wycombe Wanderers were beaten for the first time this league season as Tranmere earned their first maximum haul in a 2-0 win at Adams Park.