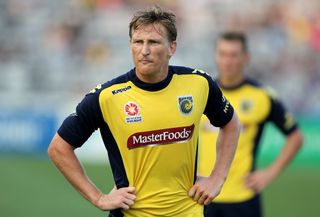 Matt Simon had given the visitors an early lead, but Kenny Cunningham struck on the stroke of half-time to end a frustrating half for Wellington on a high.

The visitors found attacking opportunities hard to come by after the interval but were awarded a penalty by referee Matthew Gillett when Trent Sainsbury was fouled by goalkeeper Glen Moss.

They didn't make the most of it, however, with McBreen's attempt well wide of the mark and the Phoenix survived with a point from the tense encounter.

But Mariners coach Phil Moss was left ruing what could have been as McBreen's missed penalty cost his side the chance to reduce the deficit between themselves and the A-League's second-placed Western Sydney Wanderers to three points.

Jeremy Brockie's form remains a concern for the Kiwi outfit. The 2012-13 Golden Boot runner-up was again toothless in front of goal and has now not scored since November.