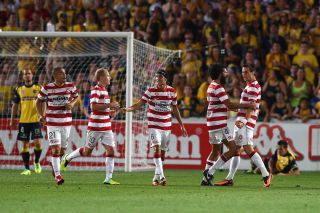 Graham Arnold's men looked set for all three points in the re-match of last season's grand final after Mitchell Duke put them in front after 55 minutes at the Bluetongue Stadium.

However, Tomi Juric had other ideas as he snatched a share of the spoils for the visitors with an 87th-minute leveller.

Western Sydney had the better of the opening exchanges and should have taken the lead in the 15th minute, but Youssouf Hersi could only blaze over the bar after a double-save from Mariners keeper Justin Pasfield.

However, the champions grew into the game and eventually edged ahead 10 minutes after the interval when Australia international striker Duke finished off a fine team move.

But Western Sydney were not to be denied as new signing Juric got on the end of Hersi's fantastic cross to steal a hard-earned point late on.

In Saturday's other game, Melbourne Victory and Melbourne Heart played out an underwhelming 0-0 derby draw at the Etihad Stadium.

Ex-Liverpool attacker Kewell carved out a good opportunity for Golgol Mebrahtu with a clever pass midway through the first half, but the Sudan-born striker could only shoot wide after rounding Victory keeper Nathan Coe.

Victory thought they should have had a penalty two minutes into the second half when Adama Traore's shot hit the outstretched arm of Patrick Kisnorbo, only for referee Peter Green to turn down the hosts' appeals.

Victory forward Archie Thompson had the best chance of the second half but unmarked, he nodded wide following a James Troisi cross.

And both Melbourne sides were forced to settle for a draw in their opening game of the new A-League campaign.