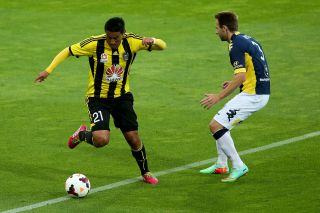 Carlos Hernandez's first-half brace sandwiched a screamer from Kenny Cunningham as Wellington raced into a three-goal lead prior to the interval.

Further goals from Jeremy Brockie and Stein Huysegems piled further misery on the Victory, who missed the chance to go second in the A-League, and enabled the resurgent Phoenix to claim a fourth win in five matches.

The visitors' defeat was especially disappointing for former Phoenix star Kosta Barbarouses, who was playing in Wellington for the first time since returning from a stint in Greece with Panathinaikos.

Hernandez opened the scoring after 18 minutes following good work from Tyler Boyd and the Victory were left with a mountain to climb after conceding two further goals at the end of the first half.

Cunningham found the net with a long-range effort before Hernandez scored again from the penalty spot to make it 3-0.

There was no way back for Melbourne and substitute Brockie made a positive impression in the closing stages, scoring himself before laying on Wellington’s fifth for Huysegems.

In Saturday's other game, Central Coast Mariners kept the pressure on the top two with a 1-0 win at out-of-form Sydney.

Mile Sterjovski's second-half thunderbolt, which took a wicked deflection off Matthew Jurman, proved the only goal of the game and handed the visitors a deserved victory.

Sydney have now won just one of their last seven matches, but things are much more positive for the Mariners, who are unbeaten in four and within seven points of leaders Brisbane Roar.

Phil Moss' men wasted a string of opportunities in a first half that saw Sydney’s Ranko Despotovic have a goal correctly ruled out for offside.

Corey Gameiro then spurned a fine opportunity prior to the Mariners claiming the all-important breakthrough.

Sterjovski was given too much space just outside the box and his powerful shot struck Jurman on the arm to leave Vedran Janjetovic wrong-footed.