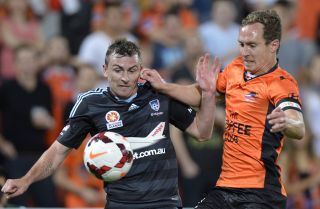 The 2010-11 and 2011-12 champions produced a dominant performance in front of their own fans, with Matt Smith, Henrique and Jade North all scoring in a devastating seven-minute spell at the end of the first half to send Brisbane into the break leading 3-0.

Sydney, who saw captain Alessandro Del Piero limp off injured before the interval, could not muster much of a response in the second period and Thomas Broich eventually put the result beyond doubt with a fourth for the hosts on 80 minutes.

Frank Farina's men set up to frustrate Brisbane early in the game and their tactics appeared to be working until Smith broke the deadlock after 37 minutes when he nodded home a Broich free-kick.

And the home side wasted little time in extending their advantage, as smart finishes from Henrique and McKay put them three to the good, before Broich got in on the act with 10 minutes left as he fired home from Ivan Franjic’s delivery.

In Saturday's other A-League encounter, reigning champions Central Coast Mariners came from two goals down to earn a 2-2 draw against Melbourne Heart.

Marcos Flores struck twice from the penalty spot for the Mariners after a brace from Heart forward David Williams in the opening 15 minutes of the second half had seemingly put the home side on track for victory.

Williams opened the scoring on 54 minutes thanks to a blunder from visiting keeper Justin Pasfield after a low-key first half at AAMI Park, before the Australia international doubled his tally just six minutes later.

However, referee Ben Williams gave the visitors a route back into the game when he pointed to the spot after an infringement from Patrick Kisnorbo with 18 minutes to go.

Flores made no mistake with the resulting spot-kick, and then scored from 12 yards again just five minutes later when Williams adjudged Patrick Gerhardt to have blocked a Mitchell Duke shot with his arm.

The result means both the Heart and Mariners have begun their A-League campaigns with consecutive draws.