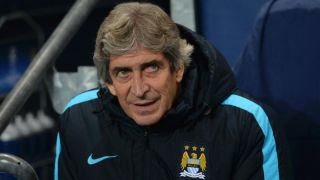 Manchester City manager Manuel Pellegrini joked about Rafael Benitez's sacking from Real Madrid on Monday, offering a reminder he at least completed a full season at the Spanish giants.

The Chilean spent one term in charge at the Santiago Bernabeu in 2009-10, failing to win La Liga despite accumulating an impressive 96 points.

A trophy-less campaign resulted in his dismissal, while Benitez was removed less than halfway through the season, despite Madrid being just four points back from leaders Atletico Madrid.

Pellegrini made light of the Spaniard's situation but still offered words of support to his colleague.

"At least I finished the year," the Chilean joked. "I'm sorry for Rafa Benitez. He's a manager I respect, but I'm not surprised."

Former Madrid midfielder and Castilla coach Zinedine Zidane has been appointed as Benitez's replacement and Pellegrini warned of the difficulties that come with managing the club.

"It's always difficult to manage a big team. It's more difficult in the way they manage the position of the coach [at Madrid]," he said.

"It's absolutely different here. That's why one team is changing manager every year, but it's not the politics of the owners here to change immediately if you don't win a title."

The 62-year-old's future at the Etihad Stadium has come into question with the club persistently tipped to recruit Pep Guardiola.

That speculation has increased since December, when the former Barcelona boss announced he will leave Bayern Munich at the end of the season.

On Tuesday, Guardiola confirmed a desire to manage in the Premier League is the driving force behind his decision to leave Germany, but Pellegrini would not comment on the situation.

"It's a question I answered about two weeks ago and I'll say no more about that," he added.