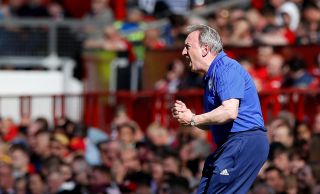 Lee Peltier hopes Neil Warnock will stay on as manager after relegated Cardiff went out “with a bang” by beating Manchester United.

Last weekend’s home loss to Crystal Palace sealed the Bluebirds’ fate with a match to spare, meaning Sunday’s trip to Old Trafford was merely the chance to make a memorable farewell to the Premier League.

Few expected anything other than a home win, but Cardiff dug deep to secure their first victory against United since 1960 as goals from Nathaniel Mendez-Laing either side of half-time earned a 2-0 triumph.

Warnock’s name was chanted by the raucous visiting fans from the outset and full-back Peltier wants him to remain in charge next season to spearhead a promotion charge.

“The gaffer has been fantastic,” Peltier told Press Association Sport. “He has done everything he can.

“He has rallied the troops all season. We’ve just come up that little bit short.

“That little bit more quality at times and I thought we would have been alright.”

Asked what he knew of Warnock’s situation, Peltier added: “I’m not too sure. I think he’s got meetings tomorrow with the owners, etc, but hopefully he stays.

“He has been massive for us and the fans, everything, the club – he has brought the whole club together, so hopefully he stays.”

Warnock is set to meet Cardiff chairman Mehmet Dalman and chief executive Ken Choo in London on Monday to talk about the club and his position.

The 70-year-old is keen to get a clearer idea on their transfer muscle and Peltier believes the United performance showed they are ready to bounce straight back.

“The group has been fantastic,” said Peltier, who was part of Cardiff’s 2017-18 promotion side.

“We’ve given everything. We’ve just come up a little bit short.

“As you can see today, we came out knowing that we’re relegated and won 2-0 at Old Trafford, which is a massive achievement.

“We’ve gone out with a bang and we just look forward to next season now.

“I think if we keep the lads together, I think we’ve got an even better team than we did when we went up.

“I think it gives you a good basis in the Championship. If we keep the group together, I think we’ll be pushing for promotion.”