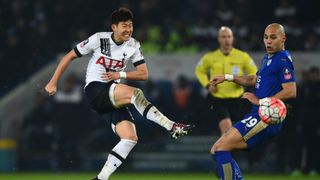 Son Heung-min scored one and set up another as Tottenham eased into the fourth round of the FA Cup with a convincing 2-0 victory over Leicester City in the third meeting between the two sides in the space of 10 days.

The South Korea international opened the scoring with a blistering effort 39 minutes in, before turning provider for Nacer Chadli midway through the second half.

Leicester were poor throughout a first half of few chances and it was Spurs who took a deserved lead courtesy of Son's outstanding strike.

Claudio Ranieri's side, unbeaten in their three meetings with Tottenham this season prior to Wednesday's third-round replay, started sharply in the second half and would have been level had Michel Vorm not pulled off a fine save to deny Demarai Gray a first Leicester goal.

For all the hosts' pressure, however, they were undone once more shortly after the hour mark, Son slipping a neat throughball into Chadli, who coolly converted Tottenham's second.

Substitute Harry Kane squandered a gilt-edged opportunity to put the result beyond all doubt soon after when he drilled a low strike straight at Kasper Schmeichel, but the miss mattered little as Tottenham held firm to set up a trip to League One side Colchester United in the next round.

Both managers made wholesale changes from the starting line-ups they fielded in their respective Premier League fixtures at the weekend, and that was reflected by a cagey start to proceedings.

Tottenham should have taken the lead 10 minutes prior to the interval in the first true chance of the game, when Ben Davies' excellent cross was met by Erik Lamela, but the winger was unable to direct his header goalwards.

However, Spurs did not have to wait long to go ahead, Leicester youngster Ben Chilwell allowing Son too much space on the edge of the area and the forward duly dispatched a fantastic finish past Schmeichel.

Ranieri turned to Shinji Okazaki - who netted when the sides drew 2-2 in the first FA Cup encounter - at half-time in order to add some energy to a lacklustre display.

That change almost paid dividends as Okazaki won possession high upfield before laying it off to Andy King, who teed up Gray, but Vorm was equal to the youngster's curling effort.

At the other end, Schmeichel could do nothing to prevent Chadli extending Tottenham's advantage soon after, the Belgian sliding home a neat finish from close range after being set up by Son.

Mauricio Pochettino introduced Kane on the hour mark and the England striker got through on goal with just under 20 minutes remaining, but he was unable to squeeze a finish past Schmeichel.

Gray did test Vorm once more late with a long-range strike that dropped onto the roof of the net, but any semblance of a Leicester fightback ended there as they slumped out in lacklustre fashion.