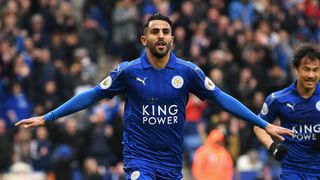 Riyad Mahrez scored on his 100th Premier League appearance to help Leicester City to a comfortable 3-0 win over Watford that moved the champions into the top half of the table.

Despite a miserable start to the season, Leicester can still finish as high as eighth under Craig Sheakespeare – who replaced sacked title-winning manager Claudio Ranieri – and victory at the King Power Stadium leaves them ninth and also mathematically ensures they cannot be relegated.

Leicester went in front seven minutes before the break when Wilfred Ndidi lashed home his second goal since he joined the club for £17 million from Belgian side Genk in January.

Mahrez then doubled Leicester's advantage in the second half, while Marc Albrighton added a third in second-half injury time as the Foxes condemned the struggling Hornets to a fourth defeat in their last five games.

Walter Mazzarri's side had chances to score in either half, but Leicester goalkeeper Kasper Schmeichel made a pair of vital saves before defensive errors allowed Ndidi and Mahrez easy opportunities to score.

With the win, Leicester move into ninth, although they face a tough task to stay there with matches against Manchester City and Tottenham to come in their last three games, while Watford are 14th but eight points above the drop and all but certain to stay up.

A poor throw by Kasper Schmeichel allowed Watford the chance to open the scoring after 12 minutes but Tom Cleverley wastefully side-footed the ball well wide of the target.

Five minutes later, Mahrez rolled a precise free-kick into the box where Jamie Vardy's first-time shot was turned onto the post by Adrian Mariappa.

Leicester continued to have the better of the early chances and Christian Fuchs' cross from the left might have found the net via the head of Watford's Christian Kabasele had Heurelho Gomes not made a diving fingertip save.

Watford found more space in attack as the first half went on and Schmeichel made good saves from Stefano Okaka and Cleverley.

But it was Ndidi that gave the Foxes the lead after 38 minutes.

A short corner teed up Danny Drinkwater for a cross that Etienne Capoue should have cleared but he fumbled the ball to Ndidi, who lashed it high into the roof of the net.

Vardy broke clear four minutes into the second half when Shinji Okazaki picked him out with a throughball and the England striker hit a low drive that was well saved by Gomes low to his left.

Just as Watford started to get numbers forward in search of an equaliser, Mariappa failed to control a high ball and Mahrez pounced on the mistake, sprinting into the box before sliding the ball between Gomes' legs to make it 2-0.

Gomes kept the Hornets in the game eight minutes later when he saved Vardy's low shot after the striker was allowed to run into the box unchallenged, and there were more heroics from Schmeichel at the other end as he tipped Cleverley's dipping drive over the crossbar.

And there was time for a third for the hosts. Vardy was allowed a free run down the left flank in stoppage time and he squared to Albrighton, who rattled in a spectacular effort that was no less than Leicester deserved for a dominant performance.