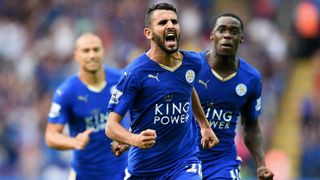 Riyad Mahrez has called on Leicester City fans to inspire their side to a revenge victory when they host Liverpool in the Premier League.

Claudio Ranieri's side, unbeaten at home since a 5-2 loss to Arsenal in September, head into February as league leaders, with the title having been won by every side in such a position in each of the last 11 seasons.

That said, Leicester have endured a dip in form ever since they were beaten 1-0 by Jurgen Klopp's side at Anfield on Boxing Day, with their 3-0 victory over Stoke City last week ending a run of just one win in seven in all competitions.

With matches against title-chasing Manchester City and Arsenal to come in the next two weeks, Mahrez wants the King Power Stadium to get behind the team as they enter a pivotal part of the campaign.

"We've only lost one game at home, so that shows how important the support has been," Mahrez told Leicester's official matchday programme. "For me, every game excites me, whether it's a night game or played on a Saturday afternoon.

"Our fans are fantastic, so we'll need them to be behind us and I'm sure that together we can get the three points."

Liverpool's win in December was their seventh game in the top flight without defeat against Leicester, yet Klopp's side have been dogged by inconsistent displays since then, with two victories, two defeats and one draw in their last five league games.

The Reds reached the League Cup final after a penalty shootout win over Stoke before they were held 0-0 by West Ham in the FA Cup fourth round on Saturday - a match in which Klopp fielded a number of youngsters.

The German took some criticism for his selection that day, but defender Steven Caulker believes rgiving key first-team players a break could pay dividends when they take on a Leicester side who will have had 10 days of rest since their last match.

"The manager wants to do well in every competition, and not forgetting the league," Caulker told Liverpool's website.

"We've got two big league games coming up so he decided to rest a few of the main starters and keep them fresh for Tuesday, which is obviously a good decision because it's going to be a tough game."

Jeffrey Schlupp (hamstring) remains Leicester's only major injury concern, but Liverpool are still struggling with a number of problems, with Daniel Sturridge still not deemed fit and Martin Srktel (hamstring) and Divock Origi (knee) unlikely to have recovered.

Philippe Coutinho (hamstring) and Jordan Henderson (heel) could be available should they come through training unscathed, while Nathaniel Clyne is set to continue in the side having managed the full 90 minutes against West Ham.

- On the day of this game, Leicester City will have spent 43 days at the top of the 2015-16 Premier League table – only Man City (100 days) have been top for longer this season.
- Liverpool have lost just one of their last five away games against Leicester in the Premier League (W2 D2 L1).
- The Foxes have made 37.5 per cent of their passes in the final third of the pitch this season; a Premier League high.
- Mahrez has been involved in more goals than any other Premier League player so far this season (21 – 13 goals, eight assists).
- In comparison, no Liverpool player has reached double figures in terms of Premier League goal involvement this season, with Roberto Firmino their most involved (five goals, four assists).