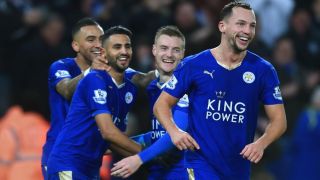 A 3-0 win over Stoke City on Saturday and Arsenal's 1-0 loss to Chelsea the following day ensured Leicester moved back atop the standings after 23 games.

Drinkwater opened the scoring in their win over Stoke, before Jamie Vardy and Leonardo Ulloa added one each, with Leicester creating a three-point gap over Arsenal and Manchester City who are tied for second.

The club are enjoying a dream run in the league this season, and Drinkwater believes their table position is completely deserved.

"After having a difficult first season in the Premier League we have turned the table around," he told The Mirror.

"We are top of the league and it is a huge achievement for this club.

"The points are proof we deserve to be there. If anyone doubts us still it is up to them – as long as we keep proving them wrong.

"It is already a big part of ­Leicester’s history what we have done. But I think we will leave the excitement to the fans.

"If we can carry it on through the season there will be so much more for them."