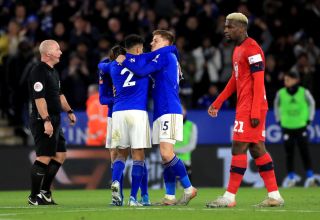 Leicester eased into the FA Cup fourth round with a 2-0 victory against Wigan at the King Power Stadium.

With a Carabao Cup semi-final first leg against Aston Villa on the horizon in four day’s time, Foxes boss Brendan Rodgers made 10 changes from the New Year’s Day win at Newcastle.

Only left-back Ben Chilwell kept his place, but it made little difference to the result as an own goal by Latics debutant Tom Pearce and a Harvey Barnes strike had Leicester firmly in control at half time – and that is how is stayed.

Wigan, winners of the competition as recently as 2013, made six changes themselves as boss Paul Cook seemingly prioritised Championship survival.

Leicester dominated the ball early on but produced nothing other than a tame 25-yard shot from Demarai Gray prior to taking the lead through Pearce’s misfortune.

Albrighton latched on to a long forward pass and tried to cut the ball back into the onrushing Barnes, but the Wigan defender got there first and was unable to sort out his feet as the ball went into the corner of the net.

David Marshall was quick off his line to thwart Barnes and deny Leicester a quick second goal.

Wigan came close to an equaliser when Danny Ward had to stretch to deny Josh Windass a tap-in from a Gavin Massey cross, with James Justin denying Kieran Dowell a debut goal with a follow-up block.

It proved an important passage of play as Leicester went down the other end and extended their lead. Chilwell broke forward with the ball and teed-up Barnes, who cut inside and unleashed a shot that deflected and gave Marshall no chance as it dropped into the corner of the net.

Marshall then pushed away a dipping, swerving effort from Gray as the Foxes looked for another goal before the break.

Summer signing Dennis Praet came close to scoring his first Leicester goal when he looped a header over the crossbar as the hour mark approached.

Wigan thought they were back in the tie after 73 minutes when substitute Jamal Lowe volleyed home Pearce’s cross, but the defender was marginally offside when delivering the ball, according to VAR.

Another long-range effort from Gray brought a fine fingertip save from Marshall before Wilfred Ndidi missed the target with a free header, spurning a golden opportunity for a third goal for his side.

Marshall kept the hosts at bay one last time late on when he parried away a Barnes shot following a fine solo run.