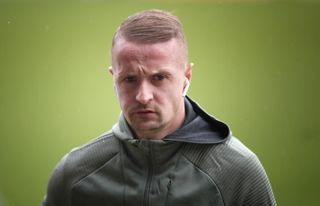 Leigh Griffiths would like nothing better than to demonstrate his return to form by shooting Scotland to the 2020 European Championships.

The 29-year-old Celtic striker missed a chunk of the season with personal problems and injury.

However, five goals since the turn of the year have helped the Hoops to a 13-point lead over Rangers at the top of the Ladbrokes Premiership and into the semi-finals of the William Hill Scottish Cup, with Neil Lennon’s side on course for the domestic quadruple treble.

Steve Clarke’s side host Israel in the Euro play-off at Hampden Park at the end of the month with the winners taking on either Serbia or Norway away in the final and the Celtic forward,  who won the last of his 19 caps against Albania in September 2018, claimed that a return to international duty would confirm his rehabilitation this season.

He said: “It would cap off my season, coming back, getting back involved and if I can help Scotland get to the Euros then it would be the icing on the cake.

“Two massive games for Scotland and we could create history, be the first team in over 20 years to get their major final.

“But two tough games and we need to negotiate them and play well.

“You  want to go to major finals, whether it be the World Cup or the Euros.

“Again, it’s going to be tough. Israel are no mugs and we have another massive tie if we get through that to beat either Norway or Serbia, two good countries with great players. We are all vying for that one spot.

“I’m ready to go. But again that’s not up to my gaffer here, that’s up to Mr Clarke if he wants to select me and get me involved.

“Nobody has been in touch. It’s a hard job and the manager needs to focus on 24 or 25 players, not just me. I’m not going to be too downhearted about him not picking up the phone to me.”