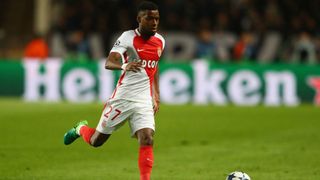 Jardim's youthful side put in some thrilling displays en route to the semi-finals in last season's competition, finally bowing out at the hands of Juventus.

However, it is a very different Monaco squad that will take part in this season's edition of the tournament, with Benjamin Mendy, Bernardo Silva, Tiemoue Bakayoko and star striker Kylian Mbappe having all left the club.

Lemar – who stayed put amid strong interest from the likes of Arsenal – is unavailable for the trip to Germany with a thigh injury, but Jardim is hoping someone else will grasp their first-team opening.

"It will open an opportunity for another player, that is the mentality of the club and the philosophy of the team," said Jardim ahead of Wednesday's opener in Group G, which also includes Porto and Besiktas.

"There are no teams weak and none very strong, there are four teams with qualities, with good players too.

"Every team can win each of the matches, so every game will be a strong challenge. We have to fight and be the best.

"[Leipzig] is a team with young players who press very high, with great speed in front, two attackers of high quality and which plays well.

"It is a strong opponent, to finish second in the Bundesliga behind Bayern [Munich], they must be a strong and compact team."

Monaco did bring in a host of new additions over the transfer window, with Keita Balde and Stevan Jovetic arriving from Lazio and Inter respectively in late August, though Jardim believes this clash will come too soon for the pair.

"Keita, Jovetic and Rachid Ghezzal are not expected to start at the Red Bull Arena," added Jardim.

"We know that when taking players at the end of the market it is never easy. Jovetic and Balde did two, three or four training sessions.

"Ghezzal had a fortnight with us and then he left for a fortnight for international selection, so he did not train much. But we believe in these players and they will be in the team soon."