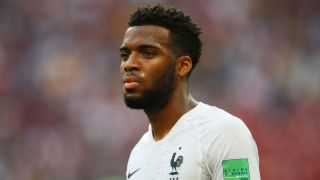 Thomas Lemar is not afraid of the physical demands usually expected by Diego Simeone at Atletico Madrid following his move from Monaco.

The France international rose to prominence in the 2016-17 season when Leonardo Jardim's young Monaco side reached the Champions League semi-finals and won Ligue 1.

After transfers to Liverpool and Arsenal failed to materialise, Lemar was not quite so impressive last term, but that has not deterred Atletico.

The Europa League winners paid Monaco a reported €70million for Lemar in a quest to bolster their numbers on the flanks following the departures of Yannick Carrasco and Nico Gaitan last term.

Both Carrasco and Gaitan had been struggling to meet the demands of Simeone, who is notorious for asking a lot of his players, but Lemar is convinced he will not have any problems.

"I know and that doesn't bother me," Lemar told reporters at his presentation on Monday.

"I have the capacity to run for long times. In Atletico they're very demanding with that, I will give all I have for the team, so if I have to run to the max, I will do it with joy."

Lemar's signing was considered a real statement of intent by Atletico, who have also brought in Gelson Martins and Rodrigo.

And the 22-year-old is targeting at least the Champions League final in his first season, with Atletico's Wanda Metropolitano stadium set to host the showpiece.

"It will be a goal for us this season," he added. "I think we will do the best we can to go as far as we can in the competition and hopefully win it since the final this season will be at home."