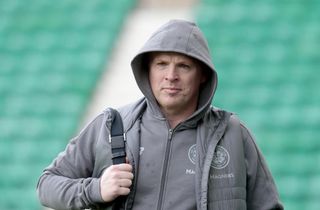 Interim Celtic boss Neil Lennon believes Ajax should be a great inspiration to the Hoops in Europe.

The Dutch club are the talk of European football following their dismantling of holders Real Madrid in their Champions League last-16 tie, with the stunning 4-1 win in the Bernabeu on Tuesday night taking them through to the quarter-finals on a 5-3 aggregate.

In his first spell as Celtic manager, Lennon, who took over from Brendan Rodgers last month after his fellow Northern Irishman departed for Leicester, guided the Parkhead club to the last 16 of the Champions League in 2013, where they lost to Juventus.

Neither his successor Ronny Deila nor Rodgers managed that feat in their combined five seasons at the helm.

Ahead of the visit of Aberdeen in the Ladbrokes Premiership on Saturday, Lennon said of Ajax: “It was magnificent but they have spent a bit of money.

“Dusan Tadic has gone in there for £15million to £18million so maybe the wage bill is around what we have but they have definitely improved financially.

“But it is fantastic and it should be a great inspiration for clubs like us.

“It takes a bit of time to build teams for that level. It took me three years to really build a good team to compete at a good level and get through the group.

“This team, with a few more additions, would be capable of competing at that level again, at a good level. But congratulations to Ajax, it was a wonderful performance.

“I wasn’t over enamoured with Real Madrid’s performance. It looked like there are a lot of problems there behind the scenes but Ajax took full advantage.”

While it remains to be seen if Lennon gets the chance of another European campaign with Celtic, he insisted that he will have a part to play in shaping the club’s future.

Scott Sinclair, Dedryck Boyata, Mikael Lustig, Emilio Izaguirre, Cristian Gamboa and Dorus de Vries are out of contract at the end of the season.

Loan men Jeremy Toljan, Oliver Burke, Timothy Weah and Filip Benkovic are all due to return to their parent clubs

The former Celtic skipper said: “I am meeting with Peter (Lawwell, chief executive) on Wednesday and with Lee (Congerton, head of recruitment) about recruitment going forward.

“It is just business as usual, club business. And I am part of that.”

It will be Lennon’s first game at Celtic Park since taking over from Rodgers and he faces an Aberdeen side who are 16 points behind in third place and who have a William Hill Scottish Cup quarter-final replay against second-placed Rangers at Ibrox on Tuesday night.

The former Celtic midfielder is preparing for a combination of nerves and excitement on his return to Parkhead after wins away to Hearts and Hibernian but expects a “difficult game”.

He said: “I don’t know if they have one eye on Tuesday but knowing Derek (McInnes) he is a brilliant manager and he will have something up his sleeve for us, I’m sure.

“The most important fact is the players are ready to go again.”